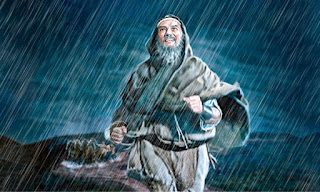 41 Then Elijah said to Ahab, “Go get something to eat and drink, for I hear a mighty rainstorm coming!”
42 So Ahab went to eat and drink. But Elijah climbed to the top of Mount Carmel and bowed low to the ground and prayed with his face between his knees.
43 Then he said to his servant, “Go and look out toward the sea.”
The servant went and looked, then returned to Elijah and said, “I didn’t see anything.”
Seven times Elijah told him to go and look. 44 Finally the seventh time, his servant told him, “I saw a little cloud about the size of a man’s hand rising from the sea.”
Then Elijah shouted, “Hurry to Ahab and tell him, ‘Climb into your chariot and go back home. If you don’t hurry, the rain will stop you!’”
45 And soon the sky was black with clouds. A heavy wind brought a terrific rainstorm, and Ahab left quickly for Jezreel. 46 Then the Lord gave special strength to Elijah. He tucked his cloak into his belt[a] and ran ahead of Ahab’s chariot all the way to the entrance of Jezreel.

It was imperative that I include this entire section of scripture in order to really bring my point home. Today I began to prepare for a something that won't happen until three weeks from now.  Even though I don't know the final outcome I believe God is saying yes and continuing to confirm what is ahead.  So I am acting as if it is already decided and I am moving forward.

One of my dearest friends called me today and when I told her what I was doing she didn't laugh but instead said, "You are being like Elijah. You are just preparing for the rain which God has promised!" What a blessing this comment was to my heart for I struggle daily with doubts and fears about the future and what God truly wants for me.

Elijah must have looked pretty foolish as he proclaimed the rain was coming and that Ahab was to go ahead and prepare when not one cloud filled the sky.  How odd it had to have been to the servant who went SEVEN times to look for a rain cloud until finally one was found.  What an amazing example Elijah is for me as he never doubted but instead spent his time in preparation and in the end we see that, "the Lord gave special strength to Elijah." I want that same strength and know God will give it if I only ask.
Posted by Jessica Daly at 5:22 PM